Her replacement will have no trouble finding his way around Cleveland, or even 3001 Euclid Avenue. 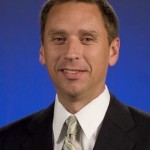 Jeff Harris has been news director at Scripps’ sister ABC station in Denver, KMGH/7…but heads back to Cleveland to take over the news reins at WEWS. (The picture is from KMGH’s announcement of Harris’ hiring back in 2008.)

We found out about the announcement early Thursday, but first word came from Denver Post TV reporter Joanne Ostrow, who had the news shortly after it was announced in the newsroom at KMGH on Wednesday:

“This is all things coming together at the same time,” Harris said by phone. “It’s a great opportunity for me personally and a perfect match for the company. Everything is aligned. It is incredibly bittersweet because of the affection I have for Denver.” The timing is right, he said, because his kids are going to be in college back East, “and there’s a station in need in my hometown.”

Given the near-constant upheaval at 3001 Euclid, we wonder what he means by “in need” – “in need” of a new news boss, or “in need” of an overhaul. This being “NewsChannel 5”, there’s nothing as constant as change.

Some of you will remember Jeff from his time here (1997-2000) when he was an investigative Producer. He left Cleveland to go to KMGH in Denver where we was Executive Producer of Special Projects for four years.

Jeff has won almost every major journalism award including a DuPont-Columbia Award, a George Foster Peabody Award, an Edward R. Murrow Award, and a national Investigative Reporters and Editors (IRE) Award. Jeff has also been honored with the National Headliner Award, the Society of Professional Journalists (SPJ) Award, and nine Regional Emmy awards.

Perhaps more importantly, we hear that KMGH has done quite well in the ratings under Harris’ time there starting in 2008, something that can’t really be said for “NewsChannel 5” these days.

SEMI-RELATED: “NewsChannel 5” has become the fourth local TV newsroom to live stream all of its newscasts on the Internet.

We don’t know when the full streaming schedule started, but WEWS’ local news product is now found live on both the NewsNet 5 website, and on the station’s smartphone/tablet apps.

Unlike Tribune Fox affiliate WJW/8’s “Fox 8 News”, which repeats its last newscast when there is no live news, “NewsChannel 5” has been feeding everything from a webcam of its studios to the ongoing promo loop that replaces commercials during the newscasts. (The link is the same link which offers up live video of breaking news, and shows like the Browns-themed “Dawgs on the Run”.)

Not only have all of its Cleveland TV news competitors been live streaming newscasts for some time, but sister Scripps station WXYZ/7 in Detroit has long been serving up streaming live newscasts as well…

SO, THAT’S WHERE HE’S GOING: Long time admitted OMW reader Mark Zinni announced weeks ago that he was leaving “Fox 8 News” for an undisclosed New England TV station for a weekday anchor opportunity.

Zinni’s destination has now been disclosed. 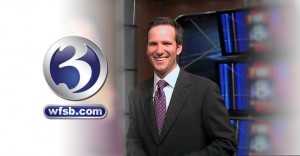 It’s Meredith CBS affiliate WFSB/3 Hartford CT, the dominant local TV news operation in that market. WFSB’s reach even extends into the Springfield MA market, where it operates a separate “CBS 3” newsroom via a low-power digital outlet there.

But there’s a more interesting part of the story for those who follow Cleveland TV and its history.

Zinni will be co-anchoring the 5:30 PM weekday newscasts at WFSB with…no, really…Denise D’Ascenzo.

Yes, that’s the very same Denise D’Ascenzo who left the very same WJW in 1986, and she’s been at WFSB ever since. (WJW was actually “WJKW” for much of Denise’s time there, due to ownership changes involving the then-WJW/850.)

Here’s a YouTube clip from 1985, with Denise alongside Tim Taylor, Casey Coleman and Dick Goddard for the first hour-long edition of “NewsCenter 8”:

The story is told in detail by Dennis House, the WFSB anchor who’s been paired with Denise for some 20-plus years.

The last person WFSB hired from WJW? Denise D’Ascenzo back in 1986, who still talks about her good old days in “the Cleve,” and can still recite the station’s Reagan-era jingle, “you sure look like a winner..”

House isn’t going anywhere, in terms of his co-anchor duties with Denise D’Ascenzo.

He’ll continue to anchor with her during the station’s other evening newscasts, with Zinni providing a half-hour break at 5:30…when we watched WFSB via its web stream last night, Denise was solo anchoring that portion of the newscast.

Zinni will keep himself busy as a dayside reporter the rest of the day, before taking over the anchor desk with his new colleague and fellow former WJW employee at 5:30.