If you’re at the top of your field, and have been for decades, you’re basically the living dictionary definition of your profession.

If the broadcasting dictionary entry is “Akron radio newsman”, the answer is clearly “See: States, Larry”. 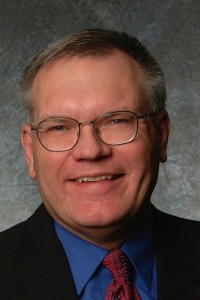 After over 40 years in radio news, the last 30-plus at Rubber City Radio Group talk WAKR/1590 Akron, Larry States is calling it a career.

We’ll call on long-time OMW reader and Rubber City VP/information media Ed Esposito for a few words about Larry, from an article he posted on the company’s AkronNewsNow.com:

In his decades of service to Akron, he’s never wavered in his professionalism, sensitivity and dedication to setting the standard the rest of us could only work harder to meet.

From Larry’s inaugural years working in Canton to his move north to Akron’s WHLO and eventually WAKR among others, the States level of service to the community has been a hallmark of his readiness to inform, educate and most of all help his neighbors and fellow citizens understand the world close at hand. Larry is a man of faith who has been a steadfast colleague and friend to all of us he’s worked with.

States said Tuesday that he was retiring to take care of his wife, Wanda, who has ataxia, a brain disorder that affects coordination. “Intellectually, it is not a problem,” States said. But the physical challenges can be enormous.

Larry States has most recently been WAKR’s midday and afternoon anchor, following a long stint as its morning news anchor alongside morning drive host Ray Horner.

But we’re not sure we have enough space to list everything he’s done, even at West Market Street and its predecessor buildings.

A brief clip from his bio on the AkronNewsNow.com website:

States served as News Director of WAKR for 14 years. Larry also served as news director of the former WAKR TV 23 in Akron. Larry was inducted into the Broadcasters Hall of Fame in Akron in 2004.

Yes, TV 23 when it was Akron’s ABC affiliate, for those who missed that piece of broadcasting history.

States worked his way into Akron from a first job at WINW/1520 in Canton, to the former WCUE/1150 in the Akron market. (At last check, WINW is still limping on the air under those call letters, as a gospel station using a low-wattage temporary long-wire facility just north of downtown Canton, and WCUE is the Akron market’s Family Radio outlet.)

Larry worked at Susquehanna talk WHLO/640 when its newsroom was active and fully staffed in the 1970s, before moving to WAKR in 1982. WHLO is a talk station again these days, but under different (Clear Channel) ownership.

As you might expect for someone so good at what he does, it will be difficult to replace Larry States…so, it won’t be done by one person.

OTHER BRIEF WEST MARKET NOTES: The aforementioned WAKR, which dropped all oldies music recently and replaced it with local and syndicated talk fare, beefs up its local talk schedule on Monday.

Or should we say, bulks up?

WAKR premieres a show with a very unpretentious name on Monday…”The Average Sports Show”, which will air Monday through Friday from 5-7 PM. (That’ll be Monday through Thursday during football season, as WAKR’s “Pigskin Preview” with Jasen Sokol and Aaron Coleman has returned on Fridays for the 2014 high school season.)

The show isn’t named “The Average Sports Show” because the station doesn’t expect much out of host Brad Russell.

The name comes from Russell’s appearances down the hall from WAKR on rock WONE/97.5, where he’s known as “The Average Browns Fan” on Jeff Kinzbach’s morning show.

They join WAKR’s first syndicated offering, the money advice show “The Dave Ramsey Show”, which still airs 2-5 PM weekdays. (Ramsey only does 3 hours live per day, and WAKR was airing as much as 5 hours.)

The rest of the WAKR talk schedule includes “Best Of” airings of the local weekday shows hosted by Ray Horner and Jasen Sokol, and repeats of the “At Your Service” Saturday morning local talk block.

That, along with the station’s usual heavy load of play-by-play sports and CBS News Radio programming, brings the venerable “1590 WAKR” to its new “News, Talk, Sports” identity…

AND FINALLY, ANOTHER DAY, ANOTHER AWARD NOMINATION: Rubber City’s country WQMX/94.9 has received yet another nomination for a national award.

The station is a finalist for CMA Medium Market Station of the Year (writes trade site CountryAircheck.com), up against KATM/Modesto-Stockton CA, KUZZ/Bakersfield CA, KXKT/Omaha NE, and WKSJ/Mobile AL….