In which a swirl of controversy envelopes radio and TV personalities…some of it significant, some of it not…

HE’S GONE: When David Oliver became now-former chief of the Brimfield Police Department, we noted that as far as we knew, he still had his part-time job as a weekend radio host at Media-Com talk WNIR/100.1 “The Talk of Akron”. 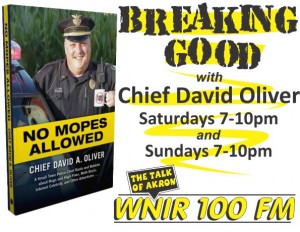 After all, his employment there didn’t depend on being chief of a small town Portage County police force.

“The weekend program Breaking Good with Chief Oliver on WNIR has been discontinued,” Klaus said. “A variety of programs from the Talk Radio Network will air from 7 to 10 p.m. while we restructure our Saturday and Sunday night program line-up.”

We don’t expect any more “restructuring” other than deciding which TRN programs air in which order. (During Oliver’s first week off, WNIR ran “The Sam Sorbo Show” when we checked in.)

The weekend evening live, local talk on WNIR started with a program hosted by long-time fill-in host Bob Earley, who eventually had a falling out with “The Talk of Akron” over subject matter.

Earley ended up hosting a weekend evening show on iHeart talk WHLO/640 up against his replacement…which didn’t last long. He’s still associated with WHLO, but Earley has a busy life – including the upcoming restart of his “Rockin’ on the River” concert series in Lorain. We presume he wants Saturday nights off as a result.

WNIR grabbed lightning in a Facebook bottle and tapped the now-former Chief Oliver in the middle of his worldwide social media fame.

He’s gone into hiding, and his worldwide reputation among many of the “crazy cousins” who visited him on Facebook is taking a hit…and like his department, Oliver has disabled his own personal Facebook page.

A relentless series of new discoveries, nearly all of them unearthed by the aforementioned Phil Trexler, means he’ll never be able to present himself again as the smiling, hugging police chief known well beyond Brimfield, let alone in Northeast Ohio, or on the radio in Akron…

INCOMING, BUT WITH DREW’S BLESSING?: Gannett NBC affiliate WKYC/3 is bringing aboard a new meteorologist. 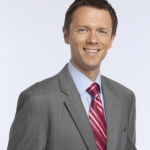 Dee will join the station from KARK-TV in Little Rock, Arkansas, where is currently the morning meteorologist and will become an important part of the WKYC Weather team of Chief Meteorologist Betsy Kling, Hollie Giangreco, Marcus Walter and Bruce Kalinowski to bring viewers even better severe weather coverage in 2015.

Did they mention “severe weather”? Hmm.

From the announcement of his departure on the Arkansas Business website:

Dee will be filling in for the chief meteorologist at WKYC, the city’s NBC affiliate, before moving to a weekend spot. The Cleveland-Akron television market is ranked 19th in the country; Little Rock-Pine Bluff is ranked No. 56.

Betsy Kling is due to give birth in March, so the timing is very much right to fill in for her.

How’d Drew get into this? Well, by accident.

First, there was this: A fake tweet from Carey, photoshopped by someone at KARK and shared on Twitter: 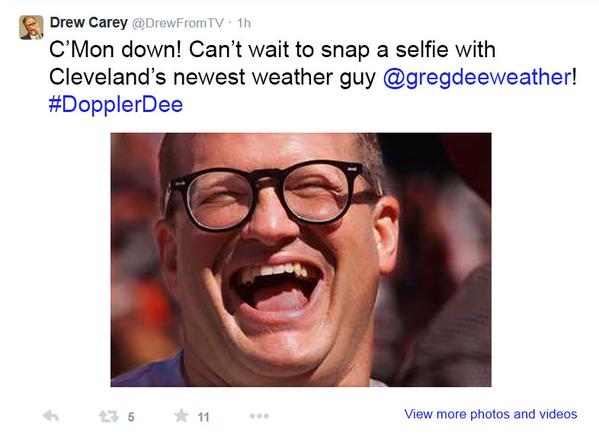 Now, Drew Carey doesn’t know “DopplerDee” from “TweedleDee”, even if he’s coming to Drew’s hometown NBC affiliate, but the use of his Twitter account name by the folks at KARK caught his attention.

Boy, did it. We’ll let the folks at Arkansas Business explain why we aren’t embedding Mr. Carey’s response:

We won’t embed Carey’s tweet because, well, he uses the kind of language we’d expect from, say, Mimi Bobeck, not the host of America’s Most Favorite Game Show. But the gist is this: “Don’t create fake tweets from me to promote yourselves!”

If you’d like to test your work filtering or the boundaries of “Not Safe For Work”, here’s Drew’s response.

It’s certainly language that’d get him fired if he used it on CBS during the “Showcase Showdown”.

And as far as we know, Greg Dee isn’t related to former Cleveland shock jock the late Gary Dee, unless Dee’s name happens to be “Greg D. Gilbert”…

PROMOTION: We don’t normally spend a lot of time away from the microphones and cameras, but here’s a name that should ring a bell to many readers.

From a Radio One Cleveland memo:

I am pleased to announce that Errol Dengler has been promoted to General Sales Manager, effective immediately. Errol has been an Account Executive with us since late 2013, and has significant management experience in our industry. Errol will report to Elisabeth Logan.

LET THERE BE JUSTICE: As expected, the new true-crime network “Justice Network” has replaced WKYC’s long-running weather radar on its 3.2 subchannel.

And as expected, “Justice” serves up a number of shows that originally ran on cable’s TruTV, sprinkled with public service announcements aiming to catch criminals.

(We suppose that is because “Justice”‘s audience is somewhat engaged in looking to help solve crimes.)

We have seen some weather warnings and advisories superimposed on the true-crime shows, so we presume 3.2 will at least have as many weather graphics as the main 3.1 channel when needed…

AND YES…: We have noticed a weaker over-air signal out of normally strong Scripps ABC affiliate WEWS/5.

At this writing, it’s enough to lock our tuner here at the OMW World Headquarters, though the actual signal level is lower than usual.

Over the weekend, there were times where WEWS’ over-air signal couldn’t lock at all…and signal strength levels were less than Media-Com low-power Retro TV affiliate WAOH-CD/29. No, really.

We’re looking into it…

PERCY: After his Stop 26-Riverbend radio company went into bankruptcy, the one and only Percy Squire’s been mounting a radio comeback…in two of his former markets, Youngstown and Columbus.

In both cities, Squire’s Sandblast LP bought FM translators, and in Columbus, that station is on.

Our content partners at RadioInsight report that W240CX/95.9 Columbus has launched as inspiration/talk “95.9 The Drum”, with syndicated host Steve Harvey in morning drive and, believe it or not, former Ohio State Buckeyes football star Maurice Clarett in afternoon drive.

OMW readers with long memories dating back to the days where we regularly covered Columbus might recall the translator’s former life as Sandyworld-owned W294AH/106.7, which found itself occupying the same frequency as a full-power move-in station formerly in Marion.

This being a Percy Squire-owned station, there are bound to be hiccups…and the very first is the inability to use an HD sidechannel of Salem’s talk WTOH/98.9 “The Answer” to feed the translator.

Translators need a “home” feed, and RI reports that Squire has filed an STA application to request continued broadcasting in the “three to four days” it’ll take to fix the WTOH feed.

Anyway, we aren’t hearing if Percy Squire will mount a “Drum” inspiration/talk station in Youngstown, where his Sandblast LP bought W258CK/99.5.

Or, for that matter, we don’t know when Squire will take over the Youngstown translator…the application to buy W258CK was approved by the FCC in early November, but as of yet, the deal does not appear to have been consummated.

One thing we do know…he’ll have to look for a different morning show, as Steve Harvey airs in the Youngstown market on Y-Town Broadcasting urban AC “Star 94.7”. That’s the combo of WGFT/1330 Campbell and translator W234CH/94.7 Girard…

GROWING PAINS: As you may know, Ohio Media Watch is part of the RadioInsight family of sites…in addition to RI itself, we share an electronic home with our long-time friend and colleague Scott Fybush and many other radio-oriented sites.

There have been some hiccups as of late, particularly an outage on Friday, but you’ll be pleased to learn that RadioInsight’s Lance Venta has moved on to a more stable hosting solution.

Lance explains it all in this item on his own site.

We’re thrilled about the future…very much so. From now on, we won’t be subject to problems visited upon us (and the other RI-hosted sites) by other sites sharing the same server and equipment.

And thank YOU for your patience. We are served well both hosting and content-wise by being part of the RadioInsight network, and Lance works very hard behind the scenes to keep things moving…