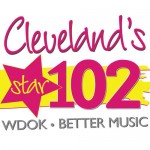 Peg it at three years and three months, as the AC side of the Halle Building has trotted out its “Star” destiny…and has become “Star 102” as of today.

The move was first reported earlier this week by super domain snoop Lance Venta of our content partners at RadioInsight…who, as usual, spotted a domain name registration before anyone short of the registrants themselves:

As the station currently runs a “$102 Star of the Day” contest, WDOK is preparing to relaunch as “Star 102“. Star102Cleveland.com was registered last week and the station’s Facebook page has already been changed to Facebook.com/star102.

At least here in the Internet universe, Star102Cleveland.com is not yet active. Even if the IT folks in the Halle Building linked up the domain today, it may take a couple of days to spread across the Internet. The station’s website can still be found at the old, uh, new address of new102.cbslocal.com.

But as noted, the Facebook page name has already changed, and WDOK, er, “Star 102” has also changed its Twitter handle…welcoming us as well:

It’s not quite the treatment we got back in 2012, when then-morning drive host Trapper Jack actually talked about us on the air, but not bad.

(And yes, as we mentioned before, Trapper Jack now does the “Blind Faith Live” podcast under his real name, Philip Keller.)

Back then, we speculated that WDOK would eventually pick up a then-building AC brand at CBS:

We’re not sure “Star” is widely used in the CBS firmament.

We do know it was used by Media One’s WREO/97.1 Ashtabula for a long time, until that station picked up the name “Mix 97.1”.

And WREO’s signal makes it into Cleveland’s eastern suburbs, so much so that the station has established a beachhead in Mentor with now-sister station WQGR/93.7 North Madison “Cougar 93.7”.