There were rumblings that the previously announced “Laff” comedy subchannel would not actually directly replace “Live Well Network” on Scripps ABC affiliate WEWS/5’s 5.2 subchannel when that home and lifestyle subchannel goes away later this month.

That turns out to be correct, but only because another subchannel network will come to Cleveland on WEWS’ 5.2 subchannel instead.

The station confirms in an official release that the “Cozi TV” network, another treasure trove of popular reruns, will start this week.

From the release, which oddly enough took a direct route here from 3001 Euclid:

This Wednesday at 10am, NewsChannel 5 will welcome Cozi TV to its digital channel 5.2, taking the place of Live Well Network.

“Cozi will give our viewers some really memorable and iconic shows to enjoy once again,” states Steve Weinstein, NewsChannel 5 VP & General Manager. “Programs like Charlie’s Angels, Murder She Wrote, The Bionic Woman, Fantasy Island, and many others will be on our TV screens to rediscover. It’s all part of our ongoing commitment to give northeast Ohioans the best news and entertainment programming across all of our channels and platforms.”

The Cozi programming was first spotted by posters on the RadioInsight Community Cleveland board. The reinvention of WEWS 5.2 was seen on various online TV listing sites starting at the now officially announced time of Wednesday at 10 AM. 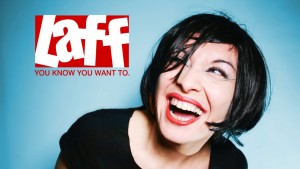 And “Laff”, a comedy-oriented network started by Katz Broadcasting (the creators of “Grit” and “Escape”), is still coming to WEWS…just not on 5.2:

There’s more exciting digital subchannel news from NewsChannel 5 on the horizon. The station plans to add Laff as its 5.3 channel on April 15th. Laff, a new digital subchannel specializing in comedy programming, will debut in Cleveland and other markets throughout the country. Viewers can expect more information on Laff upon its launch.